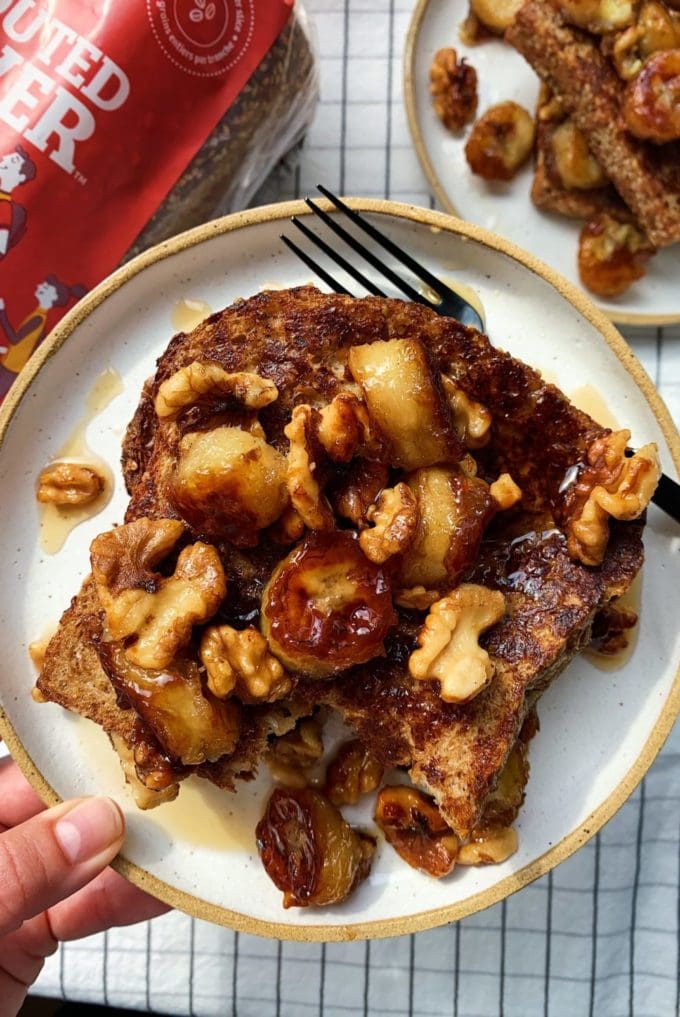 If you’re looking for a decadently healthy, easy vegan French toast recipe…look no further than this Caramelized Banana and Walnut French Toast! Just 11 ingredients and 30 minutes to make, it’s high in fibre and SO satisfying.

Sweet breakfasts and I have not always been an easy match. For one, I don’t like things too sweet. And secondly, I want to feel full and satisfied after a meal…and pancakes normally fill me up for like 30 minutes. So in order to create a vegan French toast I knew would satisfy myself AND my kids, I knew I would need to up my game.

Then, I upped the ante by caramelizing bananas and walnuts in a quick maple syrup caramel to make a cozy weekend favourite feel more like a fancy brunch (even if you eat it in your pyjamas!).

What is sprouted grain bread?

Most breads start out with the same ingredient: flour. Whole grain flours contain plenty of nutrition but because of their particle size, tend to create a fluffy loaf that raises blood sugars pretty quickly. True sprouted grain breads, on the other hand, are made without flour. Instead, the whole grains (in this case, wheat berries) are sprouted for three days before being crushed into a bread dough.

The result is a bread that is heartier than typical whole wheat breads, usually with more plant-based protein and fibre. Squirrelly bread specifically contains a whopping 10g of fibre in just two slices…more than a third of a woman’s daily fibre needs! The same two slices also have 12 grams of plant-based protein, making this easy vegan French toast recipe more filling while slowing the rise of your blood sugars…unless you go hard on the maple syrup. Of course, this recipe is so healthy that if you want to put the -ish in healthy-ish, go for it like a brunch rockstar.

How to make vegan French toast

It’s so easy to make vegan French toast…perhaps even easier than the original! 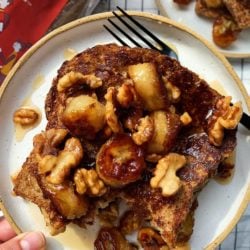 « Previous PostHealthy Vegan Blueberry Muffins With Almond Meal
Next Post » Which cooking oil is right for you?