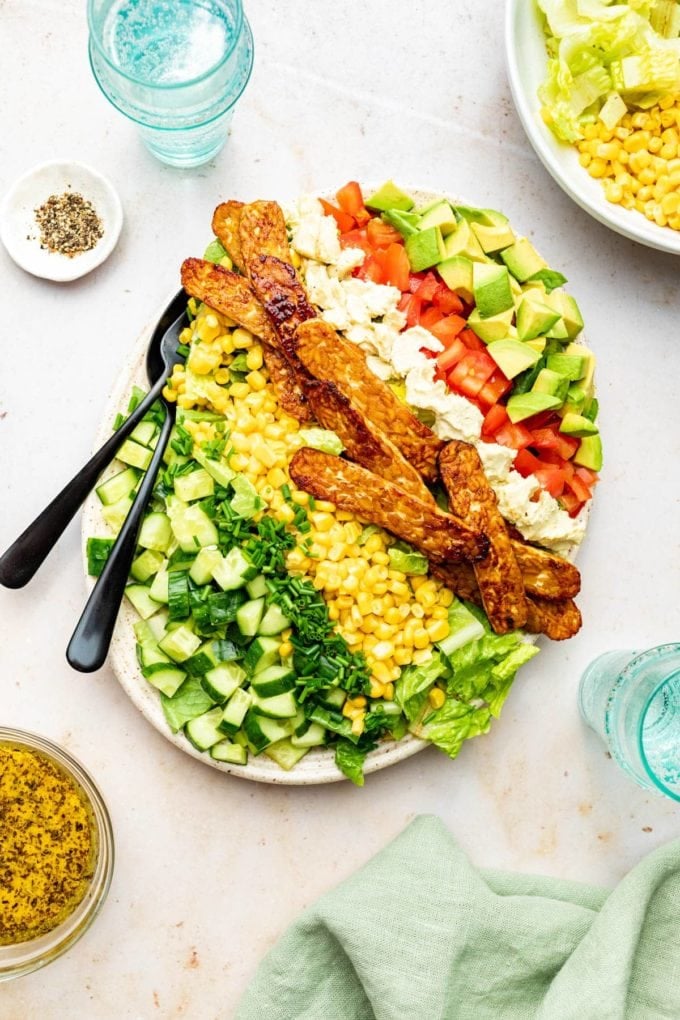 Craving a classic? This healthy vegan cobb salad with tempeh bacon has it all! Creamy avocado and blue ‘cheese’, salty + smoky marinated tempeh, tangy red wine vinaigrette and plenty of chopped veggies. It’s easy to make – just 20 minutes of hands on time – and with just a couple of tiny modifications, it’s completely low FODMAP too!

I LOVE an entrée salad. Eat More Plants Cookbook has a ton of ‘em. In my opinion, there is nothing better than tucking into a big bowl of veggies that is packed with texture AND flavour. Something salty, something sweet, something creamy AND something crunchy. So chopped salads are a big thing around here…particularly ones that come with plenty of plant-based protein.

The dietitian in me says that if you truly want a salad to be a meal, you have to add some healthy fats and some plant-based protein. But it’s not just about getting the nutrients in…the hungry human in me can confirm that if you like to full and satisfied, you don’t want to skip it! It’s a common slip up I see when people are transitioning to a vegan diet: folks take out the animal products but they don’t replace them with yummy plant alternatives that put back protein + fat. It can leave you feeling hungry, your blood sugars destabilized and always craving more carbs.

What is a Cobb Salad?

I didn’t grow up eating this Californian classic. My grandmother made the same simple Portuguese-style side salad for dinner most nights but entrée salads weren’t really a thing until my teens when my mom and I started eating Greek-style salads at least once a week.

According the internet, the likely origin of this filling and hearty salad was a late night refrigerator raid at the Brown Derby restaurant in Hollywood by owner Robert Cobb. The traditional ingredients are not very vegan friendly – bacon, blue cheese, egg and chicken – but designed to fill you up alongside a base of lettuces, avocado and tomato.

There’s some debate as to whether the original dressing was ranch, French or a red wine vinaigrette but this salad went on to become a staple at the Brown Derby and across the United States.

What you’ll need for this healthy vegan cobb salad

I wanted to keep a lot of the core salad ingredients, but I simplified the protein so this salad feels weeknight-ready and you don’t have to make 3 different types of vegan proteins for a single dish! I’m just too lazy for that.

How to make tempeh bacon

Tempeh is a healthy fermented soybean food, pressed into a brick or ‘cake’. It’s super high in plant-based protein: an 85g serving has about 17g of protein!

It’s got a richer, earthier flavour than tofu – which is a blank canvas – so I know that it can be intimidating for some. However, it’s dense, meaty texture is SUPER satisfying and it lends itself well to heavily spiced dishes or rich marinades. It’s super simple to make tempeh bacon. Just slice and marinate tempeh with soy sauce, maple syrup, apple cider vinegar, smoked paprika, garlic powder and cumin then pan-fry until golden brown.

Some tempeh bacon recipes use liquid smoke but I find that it ends up just sitting in your pantry as it’s not a common ingredient. So I am using the spice cabinet instead: smoked paprika and cumin make a smoky/earthy pairing that is super delicious.

There are a lot of different takes on vegan ‘bacon’. Some are made with mushroom (like in Eat More Plants Cookbook!), others are made from coconut…which honestly, I don’t love. While I love coconut itself, I kinda hate it when all my vegan foods taste vaguely of coconut. For example, I don’t like coconut ice cream…I’ll take cashew-based anyday!

I wanted to design this vegan Cobb salad as a lower FODMAP recipe so that you didn’t need to do a lot of swapping to make this meal fit a low FODMAP vegan eating pattern. Here’s all you need to do: 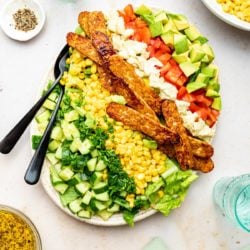