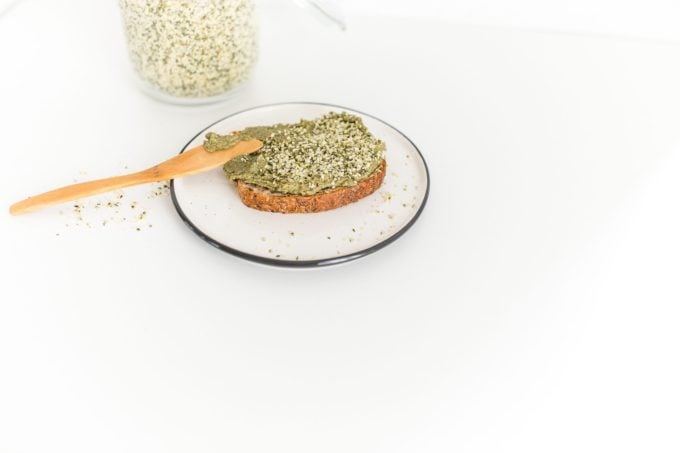 Are you new to the vegan diet? Or curious if you’re getting enough iron on a vegan or plant-based diet? This detailed guide is for you! Let’s dive in.

I know that there is a lot of confusion about iron on a plant-based diet so I wanted to arm you with as much information as I could! I’ve packed information on vegan iron sources, iron absorption and even recipes with vegan iron-rich foods in this post, so this handy table of contents will help you jump to the info you need most.

All your questions about iron on a plant-based diet, answered!

Plant-based iron is of a type called non-heme, which typically has lower bioavailability than animal-sourced heme iron. If you are on a vegetarian or vegan diet, the official recommendation is that you consume 1.8 times more iron due to lower bioavailability of the non-heme iron, which would up the recommendation to 14.5mg for non-menstruating adults and 32.5mg for menstruating adults.

However, in practice, I find this number to be a bit unrealistic and based on theoretical risks that don’t always seem to pan out in the evidence. I encourage folks to opt for the standard RDA unless low iron status or anemia becomes an issue. Check the anemia section for deeper dive into the research on anemia and iron status in vegetarians and vegans.

2. What are the best iron rich foods for vegans?

Plants are pretty incredible: they offer almost all of the nutrition you could ever need from omega 3 fatty acids to calcium, zinc to protein. In fact, the only thing that plants lack is vitamin B12…and contrary to popular belief, there are a lot of plant foods that are high in iron! I think the biggest thing to remember is that often (but not always) iron follows protein in foods. So if you craft your meals using the plate method – make your plate 1/2 fruits and vegetables, 1/4 whole grains, 1/4 protein – you’ll probably but at least one iron-rich food on your plate. Which plant foods have the most iron? I’ve got 22 vegan iron sources right here

All iron estimates taken from the Canadian Nutrient Data File, except for golden berries where data was taken from manufacturer’s website (Navitas)

3. Are vegans at risk for anemia?

Vegetarians and vegans are thought to be at higher risk for anemia because they don’t consume heme iron and may consume less iron overall…but what does the current research say?

One 2018 review of the iron status of vegetarians and vegans found that vegetarians and vegans typically had lower mean ferritin or hemoglobin values than omnivores as well as a higher percentage of anemia vegetarian females. However, this review also found that actual deficiency rates were quite variable among studies. Specifically for vegans, in one trial, anemia rates were comparable to non-vegetarians. Most of the trials included in this review were also quite small.

In a 2019 study looking at blood markers in British vegetarians, which used data points from almost 500,000 people (of which 8308 were vegetarian or vegan) there was a slightly higher risk of anemia versus non-vegetarians but again, actual iron intake was not reported.

We need to consider how much iron people are eating while vegan. Is anemia a risk if you’re meeting your iron requirement, or only if you’re not eating enough?

A recent study looking at the nutrient status vegetarian women in Germany found that iron intake was not only adequate but higher than omnivores although the data fell short of statistical significance and both groups (veg + omni) reported iron supplementation. One small Finnish trial found that vegans consumed more iron than non-vegetarians, had lower ferritin status but not increased rates of anemia. In another small trial looking at runners, who arguably may be more health conscious than sedentary folks, iron status was similar among all women (veg + omni) and full iron-deficiency anemia was not found in any of the subjects.

In my opinion, the take home message here is that anemia is a risk for anyone with higher blood losses or blood volumes (menstruating adults, pregnancy, gastrointestinal disease) and anyone who doesn’t include enough iron rich foods in their diets (omnivore OR vegan).

In my practice, I have seen just as many omnivores with anemia as I have vegetarians + vegans. This certainly not a comprehensive review of the literature (feel free to link peer-reviewed research you think I should see, in the comments!) but based on what I have seen in the research so far, I feel that a vegan diet that includes vegan iron sources at every meal will minimize your risk of anemia so eat well and carry on!

4. How can I increase iron absorption from plant foods?

There are a couple of reasons why vegan iron sources are less bioavailable than animal-source iron: including phytochemical binding and the form of iron (ferric versus ferrous). Naturally occurring phytochemicals in plant foods – oxalates, phytates and polyphenols –  bind minerals making them less available for absorption. The also carry their own health benefits so don’t start freaking out about ‘anti-nutrients’! Here are a few ways to get even more iron from your plants:

5. What vitamins should vegans take?

There are many nutrients of importance on a plant-based diet, such as calcium, iron, zinc, omega 3 fatty acids and fiber. However, there are only two vitamins I think all vegans should take daily, vitamin B12 and vitamin D3. B12 is only found naturally in animal source foods, although it is fortified in many vegan-friendly foods such as plant-based milk alternatives and nutritional yeast. Adults need 2.4mcg daily, which is easy to get from an inexpensive supplement.

Vitamin D3 is necessary for ALL eaters, from birth, because our food supply is quite low in vitamin D. I recommend 1000IU in the brightest six months of the year (May – October for us in Canada) and 2000IU in the darkest six months of the year (November – April) as a safe and general recommendation. The best way to know how much vitamin D you should take is to have your doctor test your vitamin D levels so they can customize a dose based on your current vitamin D status and health profile.

All other supplements should be customized to your needs by your healthcare professional and I don’t recommend supplementing with single nutrient iron (as opposed to a multivitamin that contains iron) unless your doctor prescribes it. Too much iron isn’t a good thing either!

6. What should I know about transitioning to a vegan diet?

If you’re ready to transition to a vegan diet, that’s fantastic! I’ve got a comprehensive post on all the steps you need to take when transitioning to a vegan diet that will help with that. 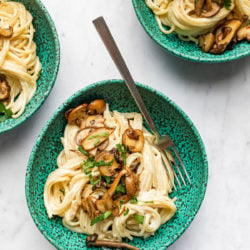 4.38 from 8 ratings
This vegan cashew alfredo sauce is creamy and oh-so delicious. Plus, it’s incredibly easy to make — it comes together in just 5 minutes! Nutritious and healthy, this is a great go-to plant-based pasta recipe.
Get the recipe 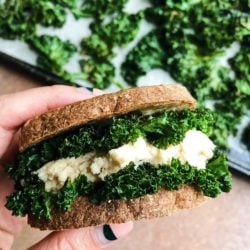 5 from 9 ratings
The perfect combination of creamy, lemony white beans layered with crispy kale! This sandwich takes just 20 minutes to make, it is super filling when served on high fibre bread and makes a great option if you want to meal prep your lunches on Sunday.
Get the recipe 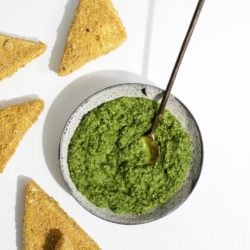 5 from 1 rating
These crispy, savoury tofu triangles make a great appetizer or veggie nugget for the kids. The mint chutney is spicy and flavourful – use any leftovers as a sandwich spread or grain bowl topping.
Get the recipe 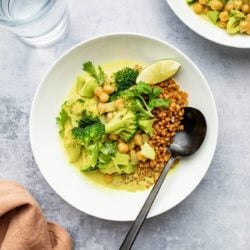 4.86 from 7 ratings
This chickpea and broccoli coconut milk curry is a delicious vegan curry recipe. It’s nutritious, packed with protein, flavourful, and so simple to make at home!
Get the recipe 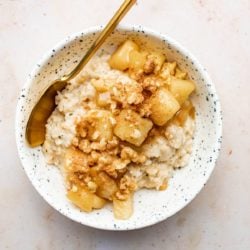 4.93 from 13 ratings
These might just be the most delicious oats you’ll ever make! This vegan apple pie oatmeal is topped with cinnamon and swirled with a five-ingredient tahini caramel sauce that is so delicious your head might explode. Seriously. It’s a hot, satisfying and decadent breakfast that comes together in less than fifteen minutes
Get the recipe 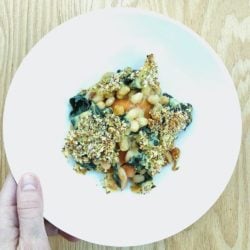 4.75 from 4 ratings
Forget everything you know about casserole being boring! This recipe, adapted from Spilling the Beans, is creamy, crunchy, a bit sweet and savoury all at once. Nutrient-dense and packed with plant-based protein and fibre, it's a family friendly meal that is sure to satisfy!
Get the recipe 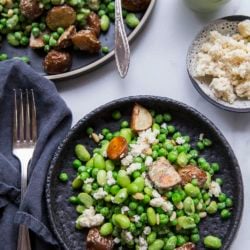 5 from 3 ratings
A filling salad, packed with protein-rich edamame and a genius almond 'ricotta' that's perfect for those cooler spring days when you're craving fresh foods but still want something a bit heartier.
Get the recipe 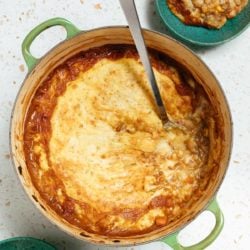 5 from 4 ratings
This vegan lentil shepherd's pie is packed with veggies and beans, surrounded by a rich gravy, and topped with a too-silky-to-be-true garlic mash. The perfect holiday main dish…or freeze-ahead casserole for when life gets hectic. Comfort food that feeds a crowd!
Get the recipe 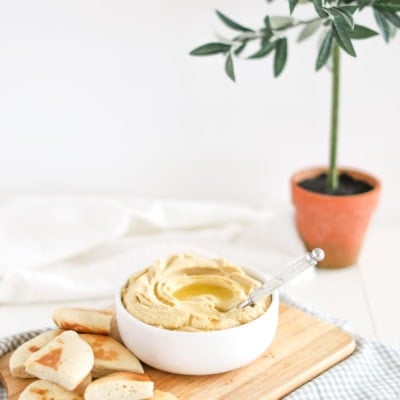 This quick and easy hummus contains iron-rich chickpeas and tahini and makes the perfect nutrient-dense snack.
Get the recipe 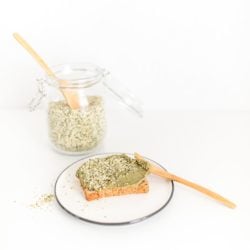 2 cups
Prep Time: 30 mins
Total Time: 30 mins
Thick, luscious seed butter made from iron-rich hemp and pumpkin seeds is perfect for toast, baked goods and more! And because it's nut free, you can pack it to school.
5 from 8 ratings
Leave a Review »
Pin Print

A few notes: If your butter doesn’t seem buttery enough, you can cheat and drizzle in some more oil and process for a couple more minutes. This will also help rescue it if it seizes. If you’re interested in making some low sugar, nut free energy bites, then add the two tablespoons of maple to the processor and seize the butter on purpose! Roll the dough into balls, dust with cinnamon and store in the fridge. If you want a milder flavoured, more traditional nut butter, substitute all the sunflower seeds and 1/2 cup of the pumpkin seeds with 1 cup cashews.
Cuisine: American
Course: Breakfast, Snack
Author: Desiree Nielsen, RD

« Previous PostProtein-Packed Vegan White Bean & Spinach Quesadilla
Next Post » I went Pegan for a day…and this is what I ate.