Home » Articles » Anti Inflammatory Diet » Which cooking oil is right for you?

Which cooking oil is right for you? 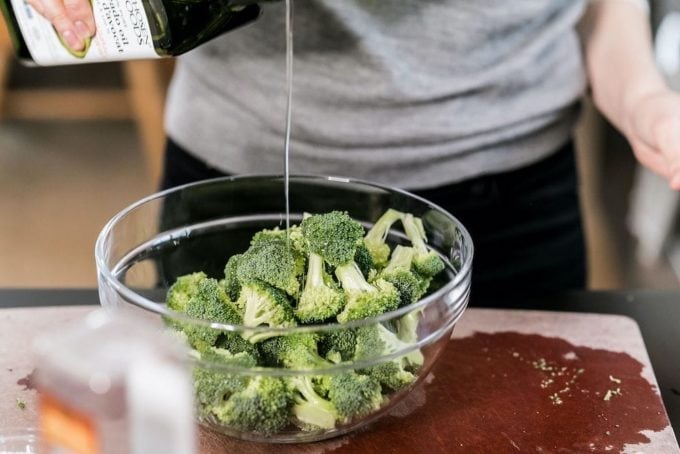 After over a decade as a registered dietitian, there are a few nutrition questions that pop up again and again like ‘which are the healthiest oils to cook with?’ Cooking oils are something we use every day, but there is SO much confusion around smoke points, processing methods, types of fats, and which oils are for cooking and which should only be used for finishing. Honestly, there is a lot to know, and I will give you all of the background you need…but I am also going to simplify it for you so you never have to worry about which cooking oil to use ever again.

How do I choose a healthy cooking oil?

The best oil for you depends on a few things: what your health goals are, the temperature you cook with and the other flavours in your dish. I wish I could say that health professionals and chefs are all in agreement on these points, but we’re not! I’m going to break down the decision points for you so you see how I create my recommendations to compare against someone else’s advice.

Here is what you have to take into consideration when choosing a healthy cooking oil:

The smoke point is the temperature at which an oil will begin to smoke – clear enough! However, why this matters (beyond just filling your kitchen up with acrid smoke) is that above a smoke point, the cooking oil begins to degrade and become less healthy for you. This is a good list of common smoke points.

What raises a smoke point? Nutrients. The more gently processed and nutritious the oil, the more it contains minerals, phytochemicals, essential fatty acids, enzymes and other matter that makes the oil more delicate and prone to smoking. A cold-pressed oil and unfiltered oil will have a lower smoke point than a filtered version of the same oil. However, most of the inexpensive vegetable oils on the market aren’t just filtered, they are heated and bleached which diminishes their benefits…so great for smoke point, but I don’t think they are healthy enough to fit an anti-inflammatory diet.

If you’re frying, you’re going to need an oil with a high smoke point. If you’re dressing a salad, smoke point doesn’t matter. However, if you are baking, sautéing or creating a moist dish like soup, matching the smoke point to the dish isn’t always as exact as you might expect. For example, you might bake a muffin at 375 but the oil you use in the muffin might never actually reach the temperature of 375, because the batter insulates it. So you don’t have to worry if the oil has a smoke point of 350.

Cooking Oil with the Healthiest Fats

Food should taste GOOD…so let’s not forget about flavour! If you have a very delicately flavoured dish, you wouldn’t want a strongly flavoured oil messing with it. But when there is plenty of whole grain flour, or spice involved, it can hide a more strongly flavoured oil. And sometimes, you want the strong flavour of the oil to become a feature of the dish, and there are plenty of oils such as walnut or sesame when that flavour is exactly what you are looking for.

So, now that we have covered the basics, here are my picks for the healthiest oils to cook with.

I am an olive oil girl, always and forever. I use it as my everyday cooking oil. I bake with it. I make salad dressings with it. I love olive oil both for the flavour but also because it is the absolute best-researched oil we have at this point. Extra-virgin, cold-pressed olive oil is the highest quality and most nutritious version of the oil…that’s what you want to buy.

There are a lot of misconceptions about cooking with extra virgin olive oil, with some saying you can and some saying you can’t. Here is why I think that divide exists: filtering. If someone gifts you a small bottle of fancy olive oil, and you pour it out and it looks cloudy, that is an unfiltered oil that is only for cold applications.

However, most extra-virgin olive oils in the supermarket are filtered, meaning that they look clear. The smoke point of filtered extra virgin olive oil varies but it is often somewhere between 325 and 400, so you can easily cook with it up to about medium-high on the stove and 375-400 in the oven. They will have slightly less benefit than an unfiltered oil but now you can cook with them, which means you can enjoy more olive oil in your diet…so I think it is a fair trade off.

Avocado oil is the newest kid on the oil block, and I absolutely love it. The reason why is that filtered avocado oil has a very neutral flavour and typically a smoke point of 500…so you can use it in almost any application!

We don’t have a ton of research on avocado oil as it is such a new product but the main fat in avocado oil is oleic acid – the same as extra virgin olive oil – which is why it is the number two oil in my kitchen. Just be careful when buying it, as not all avocado oil is filtered and unfiltered avocado oil has a strong flavour and cannot be cooked with.

Healthier cooking oils to use in moderation

These are the oils that while they don’t have strong health benefits, they are also not detrimental, so you can feel free to use them occasionally, perhaps a few times a week.

Virgin coconut oil has a distinct flavour which you either love or don’t. What’s more, virgin coconut oil has a lower smoke point than you might expect: about 350. I love actual coconut, but don’t like the coconut undertone that is so pervasive in a lot of plant-based foods. For that reason, I use naturally refined coconut oil for cooking which is still much higher quality than the coconut oil they used in the 1980s. It has a neutral flavour and a smoke point of about 400. I use coconut oil in dishes it makes sense for, like curries, and when I want a melting texture or firmness at room temperature, like in chocolates.

Peanut oil is a delicious oil for frying. It’s not one that I use often but if you are a fan of the occasional deep fry, it’s a fine choice. It actually has a decent amount of monounsaturated fats.

Grapeseed oil became super popular about 20 years ago because it is very high in polyunsaturated fatty acids, has a neutral flavour and a high smoke point. The only problem is that those polyunsaturated fatty acids are mostly omega 6 fats. So, if you fry perhaps once every 2-3 weeks and like it, it’s not a big deal. But I wouldn’t recommend that grapeseed goes on your weekly oils rotation.

Sesame oil isn’t super nutritious, and mostly omega 6 fats. However, it is highly flavourful and you only need a little bit. For this reason, I think it is healthy to have it in your repertoire as it isn’t something you are going to cook with every day.

Sunflower and safflower oils are common cooking oils with high smoke points and neutral flavours. However, they are also commonly high heat and chemical processed, which I don’t like. They also don’t have the healthiest fatty acid profile, being mostly omega 6 fats.

Healthy oils that you should not heat (finishing oils)

There are plenty of oils out there that have their own health benefits but they simply can’t stand up to heat. Instead, use them for cold applications like smoothies, salad dressings, or drizzling at the table.

The omega-3 rich oils such as hemp, flax and chia oils are high in omega 3s and great options for any cold usage, such as smoothies, salad dressings and raw desserts. Typically, you just need a teaspoon or two to give you all the omega 3 fatty acids you need in a day. They are very light and heat sensitive so look for dark coloured bottles and always keep them in the fridge.

These are the precious and flavourful versions of nut, fruit and seed oils that should be stored in the fridge and used to make salad dressings or to drizzle over a finished meal. Plenty of nutrients, plenty of flavour…use sparingly. Some fancy olive oils are so high in anti-inflammatory polyphenols that they almost make you cough a bit!

You know me, I prefer to focus on what to eat more of…so for me, the heros of the cooking oil world are extra virgin olive oil and filtered avocado oil. Enjoy those everyday and don’t worry about the rest. However, there are oils that I typically never use, so I wanted to share why.

I also want to caution against the food fear that can develop when someone recommends you ‘avoid’ something. For example, I don’t like canola oil at all, but when it is used in a low fat packaged food in a tiny amount (like an almond milk) it really isn’t going to be a big deal. The internet seriously freaks out about canola oil like it’s a communicable disease – just one touch and you’ll be inflamed forever. Let’s all take a deep breath and remember, getting 1-2 gram a day of canola oil isn’t the same as getting 30 grams a day.

Avoid: the ‘vegetable oils’ like soy, corn, and canola

I don’t use these oils at all in my kitchen, and avoid foods that are made with them in larger amounts (chips, snack foods, etc). What I don’t like about these oils:

Whew! Okay, that was a lot. So let’s maybe do a little recap of the healthiest oils to cook with, shall we?

For all other oils, avoid use but don’t be fearful of small amounts in packaged foods that don’t make up a huge part of your diet, like plant-based milks. Remember, health is not won or lost on a single meal or ingredient…it comes from the pattern of how you eat over months and years.

Have a question about cooking oils? Feel free to leave it in the comments!

9 Comments on “Which cooking oil is right for you?”