The Day the Food Sensitivity Skeptic in Me Died 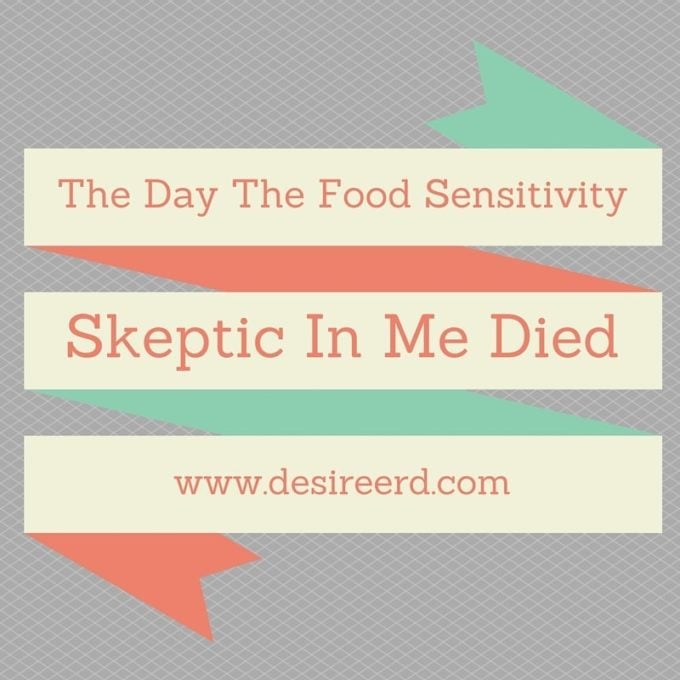 I have been interested in integrative medicine since before I became a dietitian so it is safe to say I have always considered myself open-minded. However, in my first job for a chain of health food stores, I was inundated by food-sensitive clients on a daily basis. The research to support these reactions was scarce at best.

As time went on, it seemed unreasonable that so many people could be sensitive to everyday, healthful foods. It didn’t help that many discussions revealed glaring inconsistencies and so I began to (silently) doubt the existence of food sensitivities…until I was saddled with my own five years ago.

Pregnancy and childbirth has a way of changing things in your body and for me, I found myself feeling particularly wretched when my son was three and a half months old and all of a sudden, his health changed dramatically too. I expected the lack of sleep and poor self-care would take their toll on me but seeing my son’s change was a wake up call.

Almost overnight, he became impossible to put down at night, writhing and crying, with scaly patches on his skin and dramatically different diaper contents. After a couple of weeks (and almost losing my marbles) a little voice in my head said, “check your diet.”

Those first months of motherhood had certainly led to some major dietary changes. Namely, not cooking for myself. So, as a vegetarian, this meant that all of a sudden I was eating a TON of sandwiches, pizza, pasta and baked goods. I wondered if wheat was causing the issue so I took it out of my diet. Within days, I felt better and my son calmed down. But the dietitian in me was driven to find further proof.

After about a week, I decided to try eating wheat again. I felt crummy instantly – but didn’t trust my own potentially psychosomatic reaction – and what was more convincing is that my son’s troubles came back. So I eliminated wheat a second time with the same beneficial results. However, as the skeptic in me wasn’t quite dead yet, I tried a third elimination and reintroduction. And a third time, my son and I got worse. So there it was. I became strictly wheat (and not gluten) free. And by the time my son was a year old, we introduced wheat without consequence while I still couldn’t take it. I had myself tested for celiac disease (negative) and wondered if it was overall food quality – so I tried pastry versus wheat berries but no go.

I will never know what happened to cause my sensitivity. Hormonal shifts in pregnancy can certainly change a body, and the bacteria that live within it. In addition, I had to deliver with an antibiotic drip, so a lot of good bacteria wouldn’t have been wiped out during delivery. My poor quality diet over those first three months could have altered my gut health and inflammatory status on their own.

I couldn’t eat wheat at all for about two years while now, I can tolerate moderate amounts as long as I keep myself healthy. Did I heal my gut? Did my love affair with probiotics help? Current research and my personal and professional experience allow me certain theories but a 100% definitive answer is impossible.

This is what makes nutrition so challenging now. The relationship between food and health is changing; the research is slow to catch up, leaving the door wide-open to pseudo-prophets who tout nutritional hogwash to a population understandably desperate to get well again because their traditional care providers are leaving them without answers. What I can be sure of is that we are reacting to food in a way that has not ever been seen before. I help clients in my private practice work through food sensitivities or as yet unproven dietary therapies and their improvement can be dramatic. So I have seen the power of food to heal, even when the research doesn’t confirm that it should.

Of course, I still have a healthy dose of skepticism when it comes to food reactions. Without it, I would just be another of those hog-washers promising more than they can deliver.

First and foremost, there is a ridiculous amount of hooey out there on the internet about food reactions. Because the truth is, we don’t definitively know why they exist. Research is contributing to a lot of mechanistic theories (gut barriers, microbiome, localized inflammation, neuro-active food substances) but absolutes escape us. So anyone who claims to know exactly what is going on and how to treat/deal with sensitivities should be viewed with caution.

In addition, the mind is so incredibly powerful that if you think a food will make you sick, it will. So it becomes hard to tease out the true effect of the food versus the very real effect of the brain unless doing a totally blind food challenge. And, a well functioning gut is supposed to intelligently ensure tolerance to foods and if that fails, well…I am most intrigued by focusing to fixing the gut.

My therapeutic approach is that every single individual is different. If a food makes you sick (and you are sure of it), don’t eat it. Get a dietitian well versed in food intolerance to ensure you are well nourished without it. But don’t label the food as bad (poor, poor gluten)…and don’t avoid a food when you are still unsure about its effects as eliminating a food from your diet can result in a loss of tolerance that becomes a self-fulfilling prophecy the next time you eat it.

Our bodies are incredibly complex…and incredibly pissed off at us for the way we live our lives today. So if you think that food might be at the root of your troubles, find a good dietitian who can help you navigate the complexities of nutrition so that you can eat well, feel good and love what you eat.