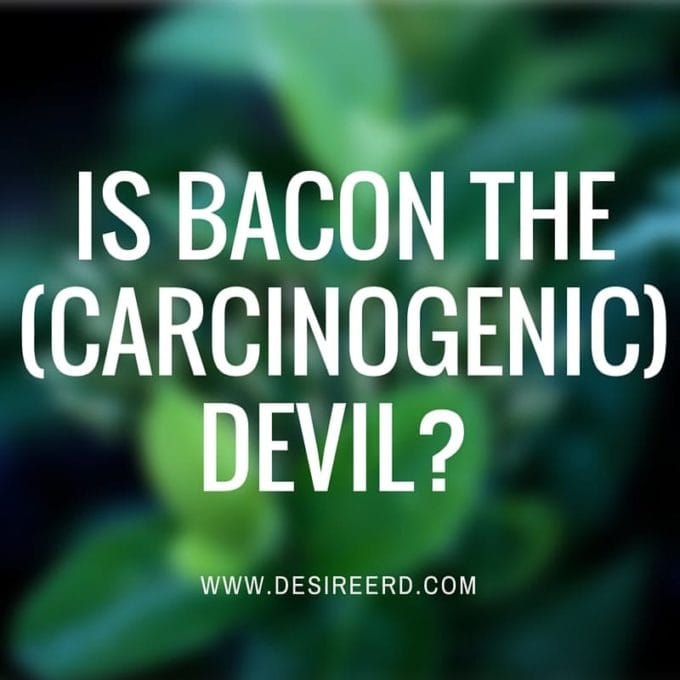 The World Health Organization (WHO? Ha, ha…lame dietitian joke) released findings from their International Agency for Research on Cancer, IARC, yesterday to a chorus of “Bacon will kill you!” and an echo of “No it won’t, sensationalist!” and even though it was my writing day, I decided not to go there. I already recommend a meat-free, anti-inflammatory diet, so my advice will not change.

Fast forward 24 hours and people are talking about this, a lot. I find myself compelled to write because I think there is something missing in the discourse. What is missing, you ask?

In between the overblown fear and the total dismissal, a bit of calm, persistent finger wagging.

Does processed meat really cause cancer?

What’s all the hubbub? Findings reported by IARC stated that for every 50g increase in processed red meat consumption, they expect your risk of cancer (particularly colon cancer) to increase by 18%.  Fifty grams is roughly 2-3 strips of bacon or a hot dog a day. One hundred grams of red meat daily is associated with a 17% increase in cancer risk – but the evidence isn’t as strongly connected.

Why is this stuff bad? A few reasons. The high salt content. The smoking process. The nitrites used to preserve and n-nitroso compounds that can result. And, haem iron…yes, the very one we have been told all our lives is the ‘best kind’ of iron. All of these things can damage your gut and increase your risk of cancer.

And yet, this knowledge is far from new. Back in the days when I could do things like read 200 page reports from cover to cover, I did just that with the 2007 AICR report on diet and cancer. They warned against processed meats and cancer then as well.

So why are we in a tizzy about this decade-old idea? The alarmists point to IARC’s lumping of processed red meats as a Category 1 carcinogen along with cigarettes and asbestos…but that simply means that they all have the potential to cause cancer. Not that they have the same impact on human health. Sniffing prosciutto won’t hurt you. Hanging Serrano ham from the ceiling won’t either…but it’s weird. Cigarettes are flaming poison; bacon is not. Red meat is classified as category 2A as the evidence on carcinogenicity is less clear.

Let’s put our rational thinking caps on. While meat is not the new smoking, it could be too easy to dismiss this finding altogether. Because, let’s get real: an 18% increased risk of cancer is actually a big deal. Particularly when you consider that colon cancer kills, on average, 25 Canadians everyday, according to Colorectal Cancer Canada. As a dietitian trying to use food to protect your health, that matters to me, especially when you consider that there are many other things in our lives – genetics, stress, environmental pollution, etc. – that we don’t have control over. We do, however, have ultimate control over what we stuff down our gullets. So why wouldn’t we want to ditch something we know is super bad for us?

Because, we seem to be infatuated with bacon…just like cheese and chemically enhanced coffee drinks. Our culture of indulgence ties us to this stuff, leading us to believe that our lives would be lacking if we went without it.

This isn’t true of course. We know that a plant-centred, anti-inflammatory diet is filled with truly, decadently delicious options that fortify our bodies instead of forcing them to go into damage control.

The good news? If you really love bacon (or prosciutto, hot dogs or salami), you don’t have to abandon them forever. The projected risks are based on daily consumption. You could easily eat these meats once a week in a healthy (like filled with plants) diet without too much harm.

However, if you use deli meat daily for lunch and eat bacon on the weekends…it’s time to focus on alternatives if you care about your health. Tuna, salmon and mashed white beans or chickpeas make awesome sandwich fillings, as does baked or smoked tofu. Turkey bacon exists…although since I don’t eat meat, I can’t vouch for its taste. And plant proteins are a really good idea for everyone, even if you still eat meat.

And, of course, if you aren’t that big on processed meats, ditch them entirely.

At the end of the day, I would never expect you to eat like a saint all of the time. Forever is a really long time to go without foods you truly love. But what you put on your plate everyday matters. A lot. So instead of focusing on the nutritional evil du jour, focus on eating more plants. Because everyone can agree that is the path to health.