Think winter produce is a snore? This cozy winter panzanella salad recipe is packed with all of the best things. From the dark and brooding Tuscan kale to the roasted delicata squash, sweet tart pomegranate and cranberries, this panzanella recipe is so good you’ll be craving salad, no matter the weather!

Maybe I didn’t get the memo, but even with all the plant-based recipes out there, this dietitian is still obsessed with kale salads. The first reason is FLAVOUR. The second reason is that it holds up so well to dressing so leftovers keep. And this winter panzanella salad recipe, which is sponsored by my friends at Silver Hills Bakery, is sure to become your new favourite kale salad!

What is a panzanella salad?

How to make a winter panzanella salad

For this panzanella-inspired winter salad, I’m starting with a hearty winter green – kale – and opting for fibre-rich Silver Hills Bakery Sprouted Grain Bread. To make it, sprouted grains are crushed into dough, as opposed to being milled into flour. The result? A beautifully textured, hearty and satisfying slice that helps to make this salad even more filling. Plus, each slice has 4-5 grams of fibre and 6 grams of plant-based protein!

You’ll need just 7 ingredients for the salad (a few more for the dressing!) and just 4 simple steps:

How to make this recipe low FODMAP

This delicious salad requires only a few simple low FODMAP swaps so you can enjoy it while eating low FODMAP for your IBS!

Step One: Use a low FODMAP, gluten free bread. Step two: Sub kabocha or patty pan squash, which are low FODMAP. Step three: Ditch the red onion. Step four: Ditch the garlic in the dressing, sub garlic flavoured low FODMAP olive oil if you have it! 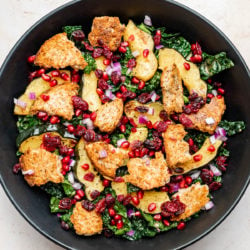 4 Comments on “Winter Panzanella Salad with Kale and Roasted Squash”