Home » Articles » Anti Inflammatory Diet » Do Nightshade Vegetables Cause Inflammation? Here’s What You Need to Know

Do Nightshade Vegetables Cause Inflammation? Here’s What You Need to Know 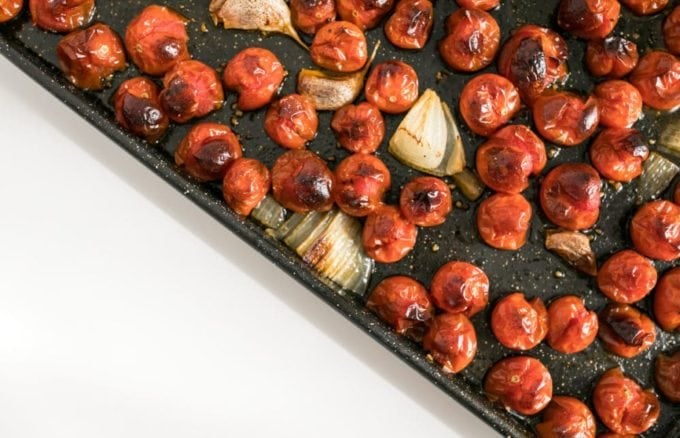 If you’ve got some sort of chronic inflammation, autoimmune or digestive disease, odds are you’ve been told to avoid nightshades foods (there’s a full list of nightshade vegetables below) by at least one co-worker or wellness-obsessed spin class buddy. This inevitably results in an overwhelming Google search that leaves you wondering why no one else realizes that tomatoes are downright evil.

Time for a registered dietitian’s opinion on this one.

Now that you’re here, I assure you that your marinara isn’t trying to kill you. For a tiny fraction of the population, avoiding nightshade vegetables might help but it’s a long shot. And definitely not where I would go first if you’re experiencing chronic inflammation, chronic pain, autoimmunities such as lupus or leaky gut. The first step is always a whole food, plant-based anti-inflammatory diet.

What Are Nightshade Foods?

Nightshade foods are plants in the family Solanaceae, comprised of over 3000 species of fruit, vegetables, flowering plants, and trees. There are a whole lot of healthy foods included in the nightshade family, including tomatoes, eggplant, and one of my fave adaptogens, ashwagandha.

While the nightshade foods are quite a varied family of plants, what they have in common is their alkaloid content, which is what some people suggest is the problem.

Nightshade plants are known for having high levels of antioxidants and anti-inflammatory polyphenols, in addition to naturally occurring phytochemicals called alkaloids.

Alkaloids are a group of compounds that you may be more familiar with than you realize. Caffeine is an alkaloid. So is nicotine. And morphine. Even piperine, the molecule in black pepper that helps improve absorption of my fave spice, turmeric, is an alkaloid.

So, what’s the big deal with alkaloids? Well, they are a big group of compounds. Some are powerful medicine, others don’t seem to do much and some – like the hyoscyamine in atropa belladonna – are downright deadly. Many alkaloids are considered anti-inflammatory in their own right, and others are used as traditional medicines.

Let’s talk about the two biggies you’re going to find in the nightshade family of edible plants.

Solanine and tomatine are glycoalkaloids, which are alkaloid molecules that are fused with sugars. Solanine is found in potatoes, and tomatine is found in tomatoes. These alkaloids are most concentrated in the green parts of the plant that are exposed to UV radiation—which is why you don’t eat tomato or potato leaves and you compost potatoes with visible greening. Even still, solanine poisoning is almost unheard of.

But, is there enough alkaloid in tomatoes and potatoes to be a problem? I was able to find two animal model studies from the same research team at the University of Alberta that suggested ingesting potato peel with increased solanine content might increase gut barrier permeability and inflammation in a model of colitis. Of course, I was also able to find animal model studies where taking potato fibre decreased inflammation and taking a potato extract that did not appear to exclude alkaloids decreased inflammation in a model of chronic obstructive pulmonary disease.

However, a larger body of research is looking at solanine for its potential anticancer effects. Right now the studies are all lab-based cell studies, which means that they take pure solanine and apply it directly to individual cells, where solanine is able to increase reactive oxygen species and increase the death of tumor cells. This kind of research does NOT mean that eating a potato is going to cause your cells to die. Let’s be super clear on that because I’m sure some blogger will latch on to that one eventually. What it does mean is that hyper-concentrated solanine may become a chemotherapy one day.

The studies on tomatine are more consistent: it is currently being investigated for its anti-inflammatory properties in a handful of studies. Just enter ‘tomatine’ into PubMed to see the 11 entries I found.

Capsaicin is a far more exciting and interesting topic! There is WAY more research on capsaicin and health outcomes. Pretty much all the research out there is looking at benefits for pain and inflammation.

Capsaicin has been studied for its ability to decrease pain, which it appears to do by a really interesting path. It first causes a bit of localized inflammation in the nervous system, which the nervous system kind of learns to not respond to, thereby decreasing pain. This nervous system inflammation can also activate mast cells to release histamine, which is why your cheeks might flush in response to spicy foods (and why, for this rosacea-prone gal, I have to watch my intake of spicy food!). There is obviously some crazy cool stuff going on here because another study, in an animal model, found that levels of capsaicin similar to a human diet could improve autoimmune nerve disorder. Even though its first order of business is to make a little inflammation.

Is this seeming complex yet? GOOD. Because it is. In the research, capsaicin has also been found to decrease C-reactive protein, a marker of chronic inflammation, along with a host of other inflammatory markers. There are thousands of other trials out there so let’s leave it at that.

You may have come across the idea that nightshade vegetables cause inflammation, leaky gut and activate the inflammatory response. In some health professionals’ minds, anyone with a gut or inflammatory issue should avoid them.

However, to say that nightshade foods cause inflammation is like saying that having a single piece of cake causes diabetes in a healthy person. If you develop type two diabetes, you don’t want to eat a lot of added sugar because it’s going to make it difficult to control your blood sugars. However, even if you do consume some sugar, how it affects you will be influenced by the time of day, what you ate at your last meal, how much sugar you eat, what you’re eating with the sugar and how active you are before and after eating the treat.

Capsaicin is a great example, it appears to cause a tiny bit of inflammation in the nervous system – but it may also directly (or indirectly) reduce chronic inflammation. And the alkaloids in these healthy plant foods aren’t the only substance they contain. There are vitamins, minerals, fibre, and other phytochemicals in these foods that all influence their effect on your body. See how complex this is?

So here is what I think about nightshade vegetables, based on my 11 years of dietetic practice and every piece of evidence I’ve seen: no, nightshades don’t cause inflammation and leaky gut. In fact, remember that previous study that suggested capsaicin could reduce leaky gut? Looks like we’ve got more to learn.

However, it’s possible to be sensitive to them, particularly if you have significant gut barrier dysfunction (AKA leaky gut) due to inflammatory bowel diseases or severe autoimmunity. More on that in a second.

Every plant is a complex balance of naturally occurring plant chemicals. And the balance in most nightshade foods is tipped pretty squarely in the anti-inflammatory direction. In fact, for tomatoes, which contain not just alkaloids but – gasp! – lectins – the evidence pretty strongly suggests that eating tomatoes is an anti-inflammatory event. Study here, here, and here.

So, should you avoid nightshade foods? And how do you know if you are sensitive to them?

What I’ve seen in over a decade of nutrition practice is that we tend to have an outsized concern for factors that have minimal impact, while we overlook larger contributors.

Chronic inflammatory and digestive disease is complex and develops over years. No one food or habit causes it. If nightshade vegetables were powerful enough to cause inflammation, all of Italy would be in big trouble.

I would be far more interested in addressing your overall diet, in particular increasing the total amount of fruits, vegetables, beans, nuts and omega-3 rich seeds you eat. I would also work on reducing the amount of sugar, refined flour, dairy, and red meat in your diet.

Heck, I would also have you address your stress levels and explore whether you’re gluten sensitive before we even came close to questioning the role of nightshades in your diet.

So no, 99.5% of us should NOT be avoiding nightshade foods.

But what if you’re doing everything else right and you’re still plagued by symptoms of inflammation and digestive distress such as loose bowels, flushed cheeks, brain fog, or painful joints?

It is possible for you to be sensitive or intolerant to anything, including healthy foods. Our bodies are all unique and current circumstances can alter how you react to normal stimuli. So maybe this is you.

If that’s the case, you do an elimination and challenge. Make no mistake, eliminating the suspect food and then carefully reintroducing it later is the only gold standard test available for food sensitivity. In my 11 years of practice, I have only had two clients who truly seemed to be sensitive to nightshades. Even still, I want to be clear that the reason they are reacting is not because nightshades are bad…but because their weakened systems are reacting to a lot.

If you are interested in doing an elimination and challenge, particularly if you’ve got health issues, I recommend you do this only under the guidance of a registered dietitian who can help ensure that no stone goes unturned in your quest for better health.. If you’re ready for that, we have amazing dietitians in our practice ready to take an integrative, evidence-based approach to feeling better.

PS – It’s important to really check out the research on popular blog posts about these kinds of topics. If no research is cited, ignore the post completely. It’s going to save you a ton of time!

And if you’re reading a blog post where research is linked, go ahead and click on a few. You may not have time or interest to read the actual studies, but you may be surprised to see that the links go back to old papers from 1981 or studies that weren’t really examining the topic but contained a one-off statement within the text. Citing research looks fancy…but sometimes it’s a wolf in sheep’s clothing.

6 Comments on “Do Nightshade Vegetables Cause Inflammation? Here’s What You Need to Know”