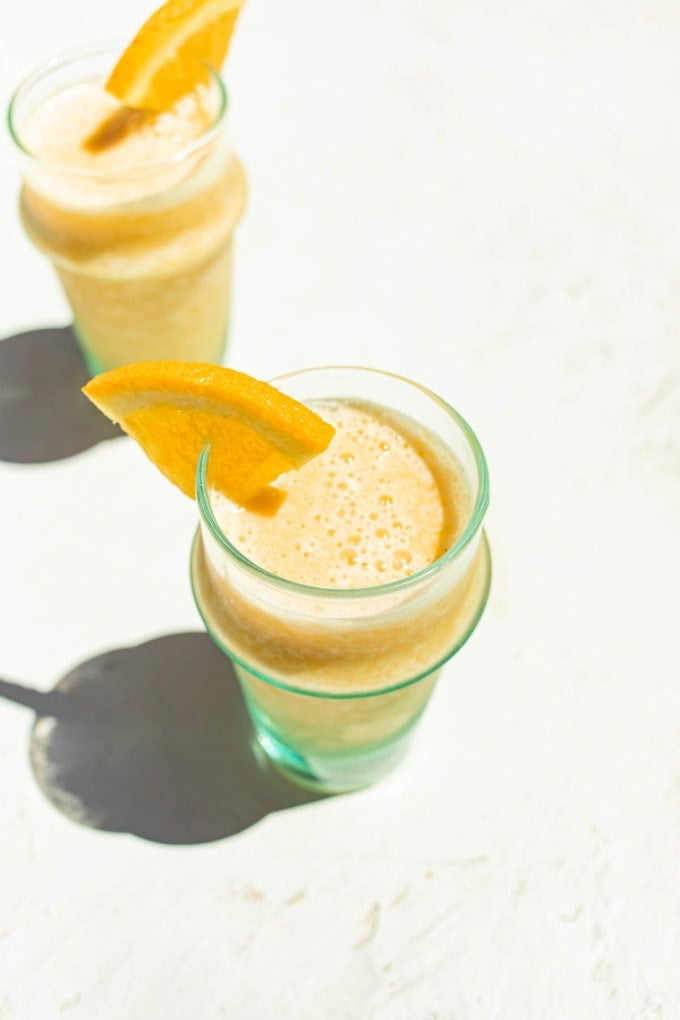 This isn’t just another orange smoothie…this is a homemade Orange Julius recipe! Creamy, frosty and just a wee bit zippy, this healthy vegan Orange Julius is one of my favourite summertime treats. It’s so easy to make, just freeze OJ into cubes and then whenever the craving strikes, you’ve got a nostalgic treat in just 3 minutes! No dairy milk, low in added sugars and gut-friendly!

What mall-roaming kid didn’t want to use their pocket money at Orange Julius? It was either that or New York Fries for me… so I have so much nostalgia around this sweet treat. And since I create healthy plant-based recipes for a living, this dietitian decided I needed a homemade orange julius recipe so I could satisfying my comfort cravings any time I like. I very much believe that you don’t have to sacrifice taste for nutrition, which is why all of the recipes in my Good For Your Gut cookbook are made for people who LOVE to eat.

I can’t honestly tell you how many Orange Julius I drank as a kid, well, until I couldn’t handle how sweet they were any longer. And they are super sweet. A medium has 57 grams of added sugars – about 14 teaspoons – which is more than double the recommended daily limit for women.

Now, let’s be clear, I’m not a fan of making any foods off limits. Sometimes, you just want what you want…and that’s 100% okay in the context of a healthy, whole foods diet. But if you’re big on sweets, it’s worthwhile getting to know the difference between whole food forms of sugars and added sugars and trying to keep it whole as often as possible.

I’ve packed a lot of info into this post…so use this table of contents to skip ahead if you need!

What’s the difference between added sugars and sugars?

Sugar is the new fat, as far as internet dietary scourges go. However, it’s super important not to get caught up in nutritionism and start freaking out about eating strawberries. Where the gram of sugar comes from matters. For example, if you eat an apple, the tough cell walls of the apple sequester the sugars and it takes time and digestive effort to get at them. That apple also contains beneficial fibre, vitamins and anti-inflammatory phytochemicals that support healthy gut and optimal metabolism.

However, if you get that same gram of sugar from actual sugar – or even commercial apple juice – it is rapidly digested and absorbed. This makes a difference for how sharply your blood sugars spike (and crash!) and whether inflammation is stoked post-meal. There isn’t a lot of actual nourishment from that sugar either. It’s pretty much just sugar. So you’re getting calories but not nutrition…and your body doesn’t like to play that game too often.

What is an added sugar?

My homemade Orange Julius definitely has healthier forms of sugar, and less sugar overall (about 18g or 4-ish teaspoons per serving) but it also rectifies another potential issue: Orange Julius isn’t vegan either. The ingredients list is actually kind of weird…like sodium carboxymethylcellulose…but it also contains egg whites and dairy ingredients so if you eat a vegan diet, it won’t work for you.

Using cashew mylk – or oat mylk if you want an even creamier texture – will keep it dairy free and if you really want to go after that froth, consider adding a tablespoon of aquafaba to replace egg white but I don’t bother.

Once you’ve got some frozen orange juice cubes made, this homemade orange julius recipe takes less than 5 minutes to make! Here is what you’ll need to make your own frosty treat…you probably already have them on hand! 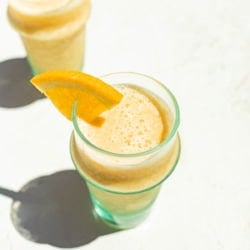 2 people
Prep Time: 5 mins
Total Time: 5 mins
Creamy, frosty and just a wee bit zippy, this healthy vegan Orange Julius is one of my favourite summertime treats. Made with fruit and juice and just a touch of maple syrup, it has about a third of the sugar of the original drink and WAY more nutrition!
5 from 1 rating
Leave a Review »
Pin Print

I highly recommend freezing an ice cube tray or two of orange juice and transferring the cubes to a freezer bag so you have them on hand! Ditto frozen bananas. That way you are ready whenever a healthy craving strikes.
Cuisine: American
Course: Dessert, Drinks
Author: Desiree Nielsen, RD