Looking for a cozy, nourishing plant-based soup? Follow these steps at home to make this warm, hearty bowl of vegetable mushroom-barley soup. Using a variety of fresh mushrooms, it packs plenty of flavour and gut-friendly ingredients to help support digestion. It’s freezer-friendly too!

As a plant-based gut health dietitian, I want to create simple plant-based recipes that offer nutrition benefits AND flavour. Because there is no point if healthy eating doesn’t taste good! And this vegan soup recipe proves that you don’t have to give up on simple comforts just because you’re eating plant-based.

Because I started my practice working with a lot of folks with celiac disease and gluten intolerance, I’ve been creating gluten free, vegan recipes for a long time – Eat More Plants Cookbook is full of them – but I realize that a lot of folks have started to associate good for your gut with gluten free, and it’s time that changes. You’re going to start seeing more recipes here that feature gut-friendly (and gluten-containing!) whole grains such as barley, farro and wheat berries because as long as you aren’t gluten intolerant, your gut actually NEEDS the incredible fibre and gut boosting benefits of these staple grains!

So I am VERY excited to share this mushroom barley soup with you. It’s giving comforting, vegan beef barley soup kind of vibes which was one of my favourite soups growing up! It’s simple, nutritious and a family friendly dinner that everyone can enjoy. It’s way easier than you think to make vegan soups from scratch, like my vegan turmeric and ginger soup with cauliflower and my nourishing vegan green soup.

This comforting and nutritious mushroom barley soup is made from just 13 simple ingredients and only takes 20 minutes of hands-on time (most of it chopping veggies!) and the rest of the cooking time is just simmering the barley until it softens. It’s a vegan soup recipe that you can make happen even when you don’t feel like cooking that much.

In the grocery store, you’ll see both pot (or hulled) and pearl barley so you might be wondering whether they are interchangeable in a recipe and they are! Pot barley is the least refined, having only the outermost husk (which is inedible) removed by a process called ‘pearling’. Pearl barley has also been polished, or pearled, but for a bit longer, so more of the bran has been removed.

Technically, pot barley has more fibre…but don’t write off pearl barley as unhealthy! It still contains plenty of soluble fibre (which isn’t found in the bran) making it a heart and gut-friendly ingredient. Beta-glucan, a soluble fibre found in both types of barley, helps to lower cholesterol and also helps feed the friendly bacteria in your gut.

Barley is one of my favourite whole grains…and yep, it’s packed with nutrition benefits, like the soluble beta glucan fibre it contains. But it also has a decent amount of plant-based protein as well as minerals: 1/4 cup of dry pearled barley has about 5 grams of protein, 6 grams of total fiber as well as 1 gram each of iron and zinc, plus plenty of magnesium, selenium and potassium.

FAQ: Can I put uncooked barley in soup?

Heck yes you can…you just need to up the water, as the barley will absorb liquid. Think about it this way: if you were making a cup of dry barley, you’d cook that in 2-3 cups water. So if putting uncooked barley into a soup that doesn’t call for it, just add 2 extra cups of water to start. Add more if the soup gets too thick before the barley is tender.

FAQ: Should barley be rinsed before cooking

I have to admit to being a lazy cook…if I don’t have to rinse, or peel, I won’t. When it comes to barley, let your eyes be your guide. If the bag of barley looks dusty, I’d give it a quick rinse in a fine mesh sieve. If not, feel free to skip it!

How to make a flavourful mushroom barley soup 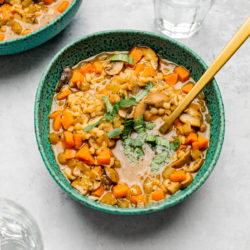 Soup will keep, covered, in fridge for four days or in the freezer for a month. Let thaw overnight in fridge and then bring up to a full steaming simmer on medium heat before serving.
Cuisine: American
Course: Main Course, Soup
Author: Desiree Nielsen, RD