This nourishing kale and quinoa salad with edamame and a juicy ginger sesame dressing is SO delicious and bonus: it comes together without a lot of chopping. It’s a nutrient-dense, meal-prep friendly vegan salad, packed with tummy-friendly fiber, energizing minerals and plant-based protein for those days when you need a boost.

I’m not gonna lie: this girl knows her way around a bag of kale slaw.

As someone who loves her salads – but doesn’t have all day to chop vegetables – there is something deeply satisfying about tearing open a bag of prechopped, prewashed salad whenever I need an infusion of plants. (I know, the plastic though…but I recycle all my soft plastics!)

I have to admit though, sometimes I’m hesitant to write recipes using convenience foods even though as a dietitian, I’m all about convenience foods that make it easier to eat well. But since I’m sharing a bunch of quick-to-prepare salad recipes this month, I wanted to create this nourishing kale and quinoa salad with my old friend, kale slaw, to show you that plant-based recipes can be as simple as they are delicious.

This salad is lavished with a juicy, ginger sesame dressing made with lime juice that is so good, it’s practically drinkable!! I’ve added hemp hearts, edamame and quinoa for multiple hits of plant-based protein, making this a nourishing salad you can enjoy as a complete meal. It also makes a great side dish or salad for a picnic or potluck..especially because this recipe is accessible to all types of dietary needs!

This salad is vegan (but no one will notice!), gluten free, nut free, and yes, low FODMAP, should you find yourself on a low FODMAP diet for IBS. If you’re looking to get your gut health on track, grab a copy of Good For Your Gut cookbook, which is packed with delicious gut-friendly recipes plus 100 pages of evidence-based gut health info.

Grab your ingredients to make this yummy kale and quinoa salad

Hungry? This nourishing salad is made with just 5 ingredients (plus the salad dressing!) and minimal chopping.

How to make this kale and quinoa salad with edamame

If you’ve got leftover quinoa, this salad comes together in 15 minutes – or about 30 minutes if you’re cooking quinoa from scratch. In fact, by the time the quinoa is cooled, everything is done and you’ve even had time to tidy up! This salad is meal prep friendly, so you can take care of lunches for the week.

Cook the edamame and quinoa: Add the edamame to a small pot of boiling water and cook for 4-5 minutes until heated through. Drain edamame and place quinoa and water in the same pot (if you don’t have leftover quinoa already!). Bring to a boil then simmer for 15 minutes until water is absorbed. Cool the quinoa in a strainer or on a baking sheet.

Make the dressing: as the quinoa cooks, shake up the sesame dressing.

Prep the salad: chop the cilantro and place it in a large salad bowl with the kale slaw and hemp hearts.

Toss it all together: add the cooled quinoa and edamame to the bowl and toss with half the dressing to start, adding more as needed. Enjoy!

FAQ: How to cool quinoa for a salad, faster!

This salad works even if the quinoa is a bit warm (which is nice when it’s cool out!) but if you don’t want to warm up your salad, here’s a hack for cooling quinoa off faster:

Spread cooked quinoa on a baking sheet! Yep, that’s it. The metal of the baking sheet will transfer heat away from the spread out quinoa faster than if the quinoa is in a big clump in the pot (which essentially means it’s insulating itself!).

Why quinoa is so dang good for you

It’s funny, we used to eat a TON of quinoa maybe a decade ago but we got away from it (maybe we overdid it ha!) and started eating more millet. But I’m kind of into quinoa again in a major way. It’s quick cooking, super versatile and absolutely packed with health benefits. 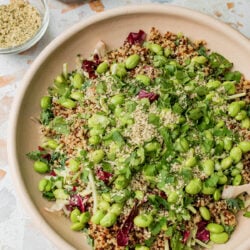 4 servings
Prep Time: 10 mins
Cook Time: 20 mins
Total Time: 30 mins
This nourishing kale and quinoa salad with edamame and a juicy ginger sesame dressing is SO delicious and bonus: it comes together without a lot of chopping. It’s a nutrient-dense, meal-prep friendly salad. Serves 4 as a main dish or 8 as a side dish.
5 from 16 ratings
Leave a Review »
Pin Print

66 Comments on “Nourishing Kale and Quinoa Salad with Edamame”