This classic bread pudding is upgraded with tender pears, cardamom and walnuts. This vegan dessert is dairy-free, yet total comfort food with the addition of sprouted grain bread which makes it high in filling fibre and plant-based protein. It’s an amazing dessert or even a deluxe brunch!

You are in for a real treat…this decadent vegan bread pudding is a cozy and comforting dessert that will fill your kitchen with the most intoxicating scent as it bakes. Honestly, I should probably apologize in advance because it smells so good that it is really hard to wait until it’s time to eat!

The dietitian in me LOVES that this recipe is not only tasty but actually really high in fibre to keep your tummy happy too, thanks to the sprouted grain bread and pears. I believe that healthy and tasty aren’t mutually exclusive…which is why I started creating plant-based recipes in the first place!

Savoury bread pudding used to be one of my go-to special occasion mains but I don’t actually cook sweet bread puddings all that much – so I thought it would be fun to partner once again with my friends at Silver Hills Bakery to create this nutrient-dense and comforting dessert. Bread pudding is about as classic as it gets: it actually dates back to the 11th century Europe, where it originated as a way to make use of stale scraps of bread. It’s one of those plant-based dessert recipes that is super versatile, making it a great back pocket recipe for using up whatever fruit, nuts or flavourings are on hand.

What you’ll need for this healthy vegan bread pudding recipe

Sometimes, I just want a classic treat…and sometimes, I want something that’s as nutrient dense as it is tasty. Eat More Plants Cookbook is filled with nutrient-dense, lower sugar treats. And this pear bread pudding – which almost has the texture of a baked french toast – fits the bill beautifully too!

It’s really easy to make with just 9 everyday ingredients and 20 minutes of hands on time:

How to make a Vegan Bread Pudding Sauce

Bread pudding is really quite simple: some bread, a few add-ins and a custard. Once you have the basics down, the variations are literally endless! Of course, it’s the custard that can be tricky from a vegan perspective…because custards typically rely on eggs for thickening and texture. You can’t just add a bit of flax and hope for the best. For this vegan bread pudding, I’m starting with a creamy plant-based milk like oat or soy and then thickening it even further by boiling with cornstarch. It’s a super simple fix – no egg replacers necessary!

What is the healthiest bread?

Oat So Lovely is high in energizing B vitamins as well as selenium, manganese and copper. Two slices even contain 9% of your daily intake of zinc, which is an important mineral for gut health and immunity. Right now you can find Oat So Lovely at Costco locations in NW Canada, but more of you will be able to try it January 2020! If you need a swap, The Big 16 works beautifully too…as would any of their other loaves. 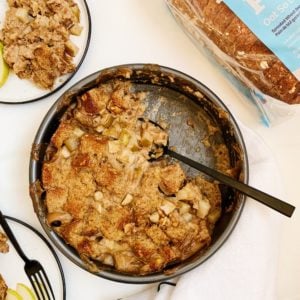 Enter your email address to receive updates from Desiree Nielsen.

Let’s get to know each other a bit better 👋

Health isn’t what you think it is. Health is fe

Thank you for coming to my TED talk 🎤 When we