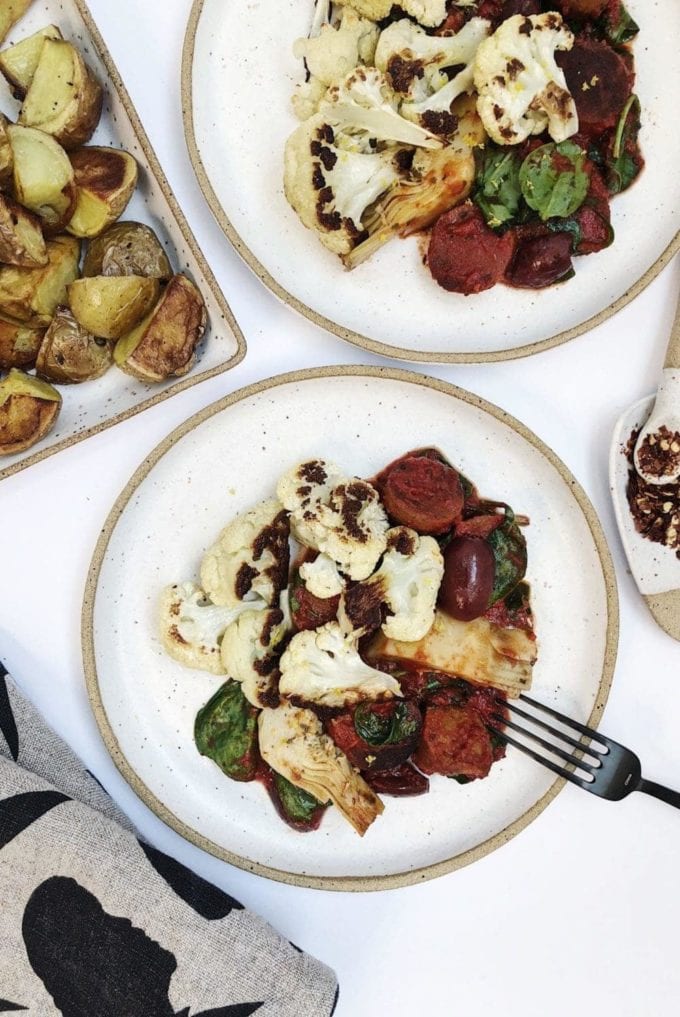 This vegan, protein-rich roasted cauliflower recipe with saucy veggies is a weeknight dinner win. And it’s made in 30-min or less!

This is such a mom dinner. And a couple of months ago, I probably wouldn’t have put it on the blog, but you guys were so stoked for my five minute breakfast I realized that you – like me – sometimes need a dead simple, tasty meal that isn’t calling for take out. It comes together in thirty minutes flat – by the time the cauliflower is roasted, the rest of it is done. And… it even tastes like a deconstructed cauliflower pizza.

This meal was born when I had a leftover jar of pizza sauce in my fridge (yep, I’m going there – this recipe has jarred sauce in it, because #reallife) and it’s all about a bunch of big flavours. It’s a salty, kind of addictive way to get your veggies in. Need less salt? Give your olives and artichokes a rinse before you use them. This dinner has all of the protein of a meat-based meal thanks to the vegetarian sausage, and has plenty of veggies, so it’s pretty much perfect. My family devoured it!

Cauliflower is a great addition to a plant-based diet. Not only is it versatile (rice, wings, pizza, bread, mash or hummus anyone?), but it’s relatively inexpensive and easy to find at most grocery stores. Being the gift that just keeps on giving, cauliflower also has many nutritional benefits. and is rich in several vitamins and minerals. As part of the cruciferous vegetable family, it’s high in fibre and loaded with vitamins C, K, and a few of the Bs. Cauliflower also contains antioxidants, and has anti-inflammatory properties. And just to add a cherry on top, one cup of cauliflower has 45g of choline – approximately 10% of the recommended daily intake – which is an essential nutrient that contributes to a healthy nervous system and also plays a role in sleep, memory, brain development and learning. What’s not to love?!

A quick note about pizza sauce…they aren’t all created equally. I used Rao’s sauce (not sponsored!), which I know is a bit pricey, but it hits all those spice notes right without being so tomato-y. As I was developing this recipe, I also tried Eden Organic which I liked but my hubs found it a bit intense on the tomato-scale. You might be better off using a half of a jar of your favourite jarred pasta sauce if you don’t have a nice pizza sauce option! 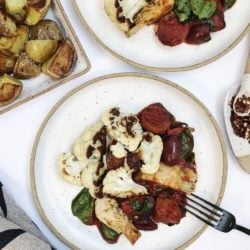 4 servings
Easy recipe, packed with flavour and same amount of protein as a meat-based meal!
No ratings yet
Leave a Review »
Pin Print