Is there anything more comforting than pot pie? This vegan pot pie recipe has the cozy flavours and textures you crave, with an easy pot pie crust made from protein + fibre-rich chickpea flour.

Pot pie was not something I grew up eating. Somehow, perogies were a classic Canadian thing that made their way into our Portuguese-Canadian menu but not pot pie. I caught up quick though because, I mean, what’s not to like? Cozy veggies, simmered in a rich gravy and topped with a golden crust? Yep, sign me up. You had me at veggies and crust. But also gravy.

Of course, I had to make this vegan pot pie recipe my own…meaning that it had to be as simple as possible, filled with rock star plants while also tasting like a decadent treat. Packed with plant-based protein and plenty of veggies, you could absolutely serve this one on it’s own…but it’s also nice with a side salad to add something fresh. Considering how my family gobbled this up – which is rare because my kids are my sternest critics – I think I nailed it.

How to Make an Easy Pot Pie Crust

I don’t do pastry crust. Really. It’s just way too fussy for me (watch me eat my words in two years after I discover a love of pastry, ha!). So I wanted to create an easy pot pie crust that I could actually do. Just as I was thinking about developing this recipe, Laura from The First Mess made this pretty chickpea flour galette and then it hit me…chickpea flour!! So this easy pot pie crust is essentially me doing Laura’s fancier crust wrong and having it turn out so right.

It takes just a few simple steps…you can’t mess it up!

There are just a few notes I want to share about the recipe as I know I’ll get asked! 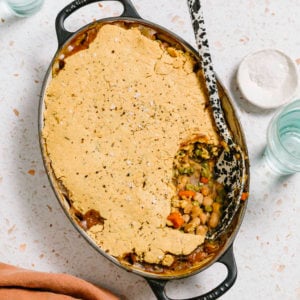 If you’re like, ‘what gravy??’, scoop out about a 1/2 cup of the broth and whisk in another tablespoon of cornstarch to get the lumps out. It’s a bit hard to do if you’ve got a bunch of veg in there but get at it. Add it back into the pot and stir. Wait a few minutes to thicken the mixture. Repeat as necessary until you reach desired thickness.

Enter your email address to receive updates from Desiree Nielsen.

Let’s get to know each other a bit better 👋

Health isn’t what you think it is. Health is fe

Thank you for coming to my TED talk 🎤 When we